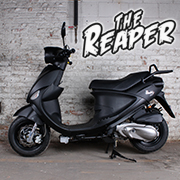 One thing that sets the Genuine Buddy apart from the rest of the pack is the slew of upgrades and modifications available.  And another thing that sets it apart is the fact that you don’t need to change a thing to have a solid scoot— but where’s the fun in that? Custom Buddys are typically geared more towards performance than looks.  It isn’t all about an air ride, custom paint, and LEDs.  It’s about adding horsepower and torque, everyone’s two favorite ingredients.

Genuine’s tech advisor, Massimo, decided to have some fun after work last fall with a Buddy 170i prototype and created what he affectionately calls the Reaper.  The Reaper’s hobbies include wheelies, burnouts, really fast rides along the beach, and sewing. Massimo kept most of his engine and transmission modifications pretty simple by using our NCY bolt-on parts.  He beefed up the suspension and brakes with more NCY goodness, and tweaked the look with our blackout kit, low profile seat and sport mirrors (expected in stock this spring).  He also upped the ante by changing the transmission gearing, and more importantly, installing a racing stripe.  The only thing missing is more cowbell. There are quite a few sleeper Buddys out there, and you won’t know them until they waste you off the line.

Black Buddy Rear Rack (maybe it is like a spoiler or something?) (RRB1-B)